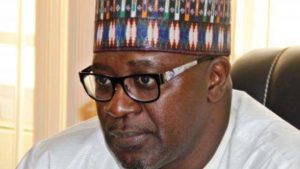 Modibbo -Kawu is facing a five-count charge bordering on fraud and abuse of office.

He was re-arraigned alongside two other defendants: Dipo Onifade and Pinnacle Communications Limited, due to an amendment to the earlier 12-count charge preferred against them.

Mr Henry Emore, prosecuting counsel, said that the amendment was a sequel to a directive from the court to remove the name of one of the defendants, Mr Lucky Omoluwa because he is now deceased.

When the charge was read to the two defendants, they pleaded not guilty just as a no-guilty plea was entered for Pinnacle Communications.

The prosecutor informed the court that besides the re-arraignment, the defendants were supposed to open their defence.

Mr Adetayo Adeyemo,  counsel to Modibbo-Kawu, however, told the court that his client had filed an application for a stay of proceedings in view of the court’s ruling on his no-case submission.

He said that his client had filed an appeal in respect to the ruling which was currently pending at the Court of Appeal.

Also, Mr Abayomi Oyelola, counsel to Pinnacle, told the court that he had filed a similar application in view of the ruling on the no-case submission delivered by the court.

Similarly, Mr Alex Iziyon, counsel to Onifade, told the court that his client had filed an application challenging the provisions of Section 306 of the Administration of Criminal Justice Act, (ACJA).

The prosecutor who acknowledged that he had received all the applications filed by the defendants, said that he intended to oppose all of them.

He told the court that he needed at least two weeks to reply to do that.

Justice Folasade Giwa-Ogunbanjo, trial judge, adjourned the matter until Sept. 28 saying the court would commence its annual vacation on July13.

The News Agency of Nigeria (NAN) reports that the charges against the defendants bordered on abuse of office, money laundering and misleading a public officer with the intent to defraud the Federal Government.

The offences, according to the ICPC, contravened Section 26 (1) (c) of the Corrupt Practices and Other Related Offences Act, 2000 and are punishable under Section 19 of the same law.

One of the charges read in part; “That you, Ishaq Modibbo-Kawu, and Dipo Onifade sometime between December 2016 and May 2017 in Abuja, within the jurisdiction of this court, conspired with each other to use the position of Ishaq Modibbo-Kawu, as Director-General of the NBC to confer a corrupt advantage on Lucky Omoluwa, (now deceased) by recommending to the Minister of Information to approve payment of the sum of N2.5 billion to Pinnacle Communications Limited, a private company as ‘Seed Grant’ under the Digital Switch-Over Programme of the Federal Government of Nigeria when you knew that the said company was not entitled to receive such grant and thereby committed an offence contrary to Section 26 (1) (C) and punishable under Section 19 of the Corrupt Practices and Other Related Offences Act, 2000.”

Harassment of Multichoice Spells Trouble for Other Investors