Konga.com, Nigeria’s largest online mall has announced the launch of a brand new mobile app in a partnership with Nokia, global phone manufacturer, designed to give shoppers in Nigeria mobile access to the wide range of products and services available on Konga.com.

This partnership is hopefully the beginning of greater things as Konga.com continues to drive ecommerce discovery across all levels in Nigeria

Onyeka Akumah, head of Marketing, Konga.com speaking on the development said: “At Konga.com, we are excited about this partnership with Nokia which has birthed this brilliant mobile app extending the convenience of online shopping to Nigerians who currently own Nokia devices to enjoy a wide variety of products from fashion to phones and home electronics to the impeccable quality of service delivery associated with our brand” that will drive the growth of e-commerce in Nigeria as a whole.

The app interface built with functionalities like “search”, “browse” and “request an order” to ensure that both new and old customers can enjoy easier shopping and discovery of the increasing number of Nokia mobile devices and several other products available on Konga.com.

Konga, Nigeria’s foremost ethical and innovative composite e-Commerce brand is set to unveil a revolutionary new solution – Konga Bulk – which the company says will represent the new normal for forward-thinking businesses and consumers in the Nigerian corporate space.

Equally important, Konga Bulk, the latest innovation from the e-Commerce giant, is set to go live on Monday, September 21, 2020.

Through this initiative, Konga is rolling out a mega platform which has been touted a potential game-changer, offering manufacturers, distributors, resellers as well as Small and Medium Enterprises (SMEs) an opportunity to take advantage of Konga’s world class assets including its secure regional warehouses, smart offices, cutting-edge technology, advanced logistics capabilities through an internally-owned subsidiary, Kxpress and its Central Bank of Nigeria-licensed payment platform known as KongaPay.

This is in addition to leveraging Konga’s e-Commerce engine and extensive marketing expertise in bringing their products and services to the consciousness of millions of Nigerians nationwide.

In other words, Konga is taking a huge burden off the shoulders of manufacturers and other business owners in Nigeria through this ambitious project. 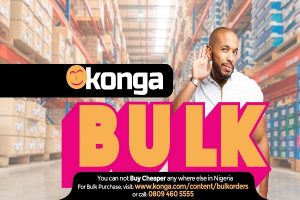 By allocating physical office and warehouse spaces to partner businesses and placing its many other cutting-edge assets at their disposal, Konga is ushering many into the new normal by bringing succour to corporate entities, many of whom have been encumbered by the COVID-19 pandemic.
Furthermore, Konga Bulk will play a very important role, bridging the gap to genuine products and services between manufacturers, distributors, resellers, bulk buyers and consumers.

Resellers and other bulk buyers can also take advantage of best prices available for genuine products exclusively through Konga Bulk.

Kalu Johnson, vice president, Strategic Business, said businesses who sign up on Konga Bulk have a lot to gain.

‘‘Konga Bulk is a very ambitious project which we have positioned as the new normal.

“It is a unique opportunity for manufacturers to take advantage of the huge assets and real estate, both physical and virtual, available at Konga.

‘‘We have invested significantly and strategically in various areas of our operations.

“Today, Konga owns arguably the largest single warehouse space in Lagos in addition to other similar massive infrastructure in other parts of the country such as Onitsha, Port Harcourt, Uyo, Abuja, Owerri and other locations.

‘‘As a manufacturer, distributor or business owner signed up on Konga Bulk, you no longer have to worry about owning your own office or warehouse space. Nor do you have to bother about the heavy investment in logistics, delivery, payment solution, technology, marketing or activations.
“You can rely on Konga’s world class competencies and assets in these areas.

‘‘Businesses must find a way to rebound from the difficulties occasioned by the COVID-19 pandemic.

“Konga Bulk, which is focused on ushering in the new normal, is one of the innovations we have come up with to provide a way out,’’ he concluded. 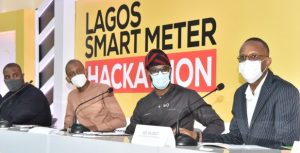 Wigwe spoke yesterday during the finals of the Lagos State Smart Meter Hackathon design held at the Bank’s Corporate Headquarters in Lagos.

An initiative of the Lagos State Ministry of Energy and Mineral Resources, the Hackathon is aimed at providing affordable electricity meters to the populace by facilitating the design and production of meters that will accelerate efforts towards achieving improvement in energy distribution, monitoring and prevention of revenue leakage.

Wigwe who was represented by Mr Ade Bajomo, executive director, IT & Operations at Access Bank, said that supporting the Hackathon once more reinforces the Bank’s commitment to leveraging technology for the betterment of the society.

“Having Hackathon and innovative programmes like this, has always been part and parcel of our DNA in Access Bank. We are forever looking for new things to do to solve real problems in Africa and beyond; new things that would move the life of our people forward.

“We are always looking forward to doing things that would make more people financially independent, driving and enhancing the well-being of the entire society,” he said.

He noted that now the world is witnessing the Fourth Industrial Revolution, and there are Africans working with the rest of the world and using technology to solve the problems of the people.

Wigwe stressed that Access Bank does not exclude the rest of the world when it comes to using technology innovations to address the problems of the people.

“That is why this Hackathon is very important because it’s our people solving our problems and leveraging global solutions to finding our answers to our own problems.

“And that is why at the Africa Fintech Foundry (AFF), which Access Bank is promoting, we want to have more innovators and innovations that will help in transforming our society for the better,” he said.

The Access Bank boss stated that to see this Hackathon come to light shows the commitment of the Lagos State Government to not only the project, but to the actualization of a smart Lagos, where electricity is accessible and affordable.

Mr. Olalere Odusote, convener of the Lagos Smart Meter Hackathon and the State’s Commissioner for Energy and Mineral Resources, said that there were very many talented people who applied for the Hackathon, noting that there were 65 submissions in all, out of which its panel of experts reduced the number to the five finalists that participated at the finals of the Hackathon.

“We had the hardware yesterday and we were very impressed with what we saw. We are expecting no less from the software side. We are going to get engaged, look at what they have to offer and then integrate it into our future.

The Commissioner said they were not just doing the Hackathon for the sake of it but are looking for solutions that will contribute to making Lagos a 21st Century economy.

He thanked Access Bank for its generosity, support and partnership with the State government. He also thanked other partners for joining in the journey of making Lagos a great state.

Five contenders each emerged from both categories of the competition, and the two winners are expected to share the prize money of seven million naira.

Finalists were shortlisted after a transparent, rigorous and competitive process.

The Hackathon attracted 274 registrations or entries, 127 of which bid in hardware category, while 147 competed in software group.

The five software finalists for the Hackathon on Thursday were Magnitronics, Vectorians, Zeena Platform, Chosen Soft Tech and Gideon.

It would be recall that during the launch of the programme on July 30th, 2020, the Lagos State Governor, Babajide Olusola Sanwo-Olu noted that the Smart Metre Hackathon Initiative marked a significant milestone in the implementation of the State Government’s plan towards improving access to electricity.

He said it aligned with the Sustainable Development Goal 7 of the United Nations, targeted at achieving universal access to affordable, reliable, sustainable, and modern energy for all by 2030.

The Grand Finale of the Hackathon holds on Friday, September 18, 2020 at Eko Innovation Centre, Ikoyi, Lagos.