The NCC noted a decrease of 993,063 in the number of telecoms users across the country in January. “Active users of telecommunications services in the country increased to 154,120,484 in February this year from 155,113,547 in January,” the telecommunications industry regulator made this known in its monthly Subscriber/Operator Data obtained released over the weekend in Lagos.

The Code Division Multiple Access (CDMA) operators had 217,566 users in February same with the result of January. Between the two surviving CDMA service providers, Visafone had 213,106 customers, while Multi-Links had 4,460 in the month under review.

It shows that the Fixed Wireless network (landline) consumers remained at 26,865 in February. NCC’s report said between the two Fixed Wireless, Visafone had 26,437 subscribers as Multi-Links maintained its November record of 428 customers.

It also revealed that the Fixed Wired operators (landline) subscriber base increased by 412, giving a total of 124,635 users in February against 124,223 recorded in January.

The report shows that the two Voice Over Internet Protocol (VOIP) networks had 89,871 active users in February, as their customers increased by 5,424 from their January subscriber base of 84,447. Of the VOIP networks, Smile Communication had 36,285 customers, giving an increase of 573 users to its January result of 35,712.

Ntel had 53,586 consumers subscribing to its products and services in the month of February, showing an increase of 4,851 user to the January record of 48,735.

According to the regulatory body, Section 89 Subsection 3(c) of the Nigerian Communications Act 2003 mandates it to monitor and report the state of the telecommunications industry.

”The commission is mandated to provide statistical analyses and identify industry trends with regard to services, tariffs, operators, technology, subscribers, issues of competition and dominance.”

This is with a view to identifying areas where regulatory intervention will be needed. ”The commission regularly conducts studies, surveys and produces reports on the telecommunications industry.”

Therefore, telecommunications operators are obligated under the terms of the licences to provide NCC with such data on a regular basis for analytical review and publishing,” the report said.

5 Reasons Why Taking Selfies Can Be Good for You

The Agency for Air Navigation Safety in Africa and Madagascar (ASECNA), has started to broadcast a Satellite-Based Augmentation System (SBAS) signal over Africa and Indian Ocean (AFI), providing its first open service in the region via NIGCOMSAT-1R Satellite managed and operated the by Nigerian Communications Satellite Ltd., under the Federal Ministry of Communications and Digital Economy.

This early open service is provided as part of the programme, which pursues the autonomous provision SBAS services in Africa, to augment the performances of the satellite navigation constellations GPS and Galileo.

With improved accuracy to within a meter, and boosted integrity, availability, and continuity of safety-related applications, these SBAS services will improve flight safety and efficiency in Africa, and also benefit the economy in many areas as land, sea, and rail transport, as well as mass-market applications, supporting user safety, cost-effectiveness, and sustainable development.

The launched open service essentially aims to carry-out technical trials, and to undertake partner airlines field demonstrations for aircraft and rotorcraft, to demonstrate the benefits of the future operational safety-of-life SBAS services, expected from 2024. It will also include early Precise Point Positioning (PPP), and emergency warning service to populations, which performance will be proven through other demonstrations.

The signal-in-space is generated by a dedicated system tested, developed as part of the “SBAS for Africa and Indian Ocean” preliminary design phase, financed by the European Union, and awarded to Thales Alenia Space, Joint Venture between Thales (67 per cent), and Leonardo (33 per cent).

The system prototype uses as reference stations the SAGAIE network deployed by CNES and ASECNA with the support of Thales Alenia Space.

The signal is broadcasted via the SBAS payload on NigComSat 1R GEO satellite of the Nigerian Communications Satellite, and an uplink station deployed in Abuja, Nigeria.

It is compliant to the standards and recommended practices of the International Civil Aviation Organisation (ICAO), and the minimum operational performance standard developed by the Radio Technical Commission for Aeronautics (RTCA) organisation.

It will be visible in the whole of Africa and the Indian Ocean, up to the West Australian coast, and also in Europe.

Dr. Abimbola Alale, managing director/chief executive officer of NIGCOMSAT, said: “we are proud to be part of this ambitious program to provide satellite navigation services in the Africa and Indian Ocean region. The use of our geostationary communication satellite NIGCOMSAT-1R navigation payload to broadcast the first signal will be Africa’s premier contribution to SBAS as a regional satellite-based augmentation system for the continent.”

On his part, Benoit Broudy, vice president, Navigation Business at Thales Alenia Space in France, said the longstanding expertise acquired with the development of EGNOS1 SBAS in Europe, and KASS SBAS in Korea, combined with the new leading-edge satellite positioning technologies make Thales Alenia the ideal partner to best support countries to implement their own SBAS efficiently.

“The equatorial region represents also a key engineering challenge for such a system due to difficult ionosphere conditions, for which Thales Alenia Space has developed a proven solution,” he stated.

Mohamed Moussa, director-general of ASECNA, said the provision of the first African SBAS early service is a crucial major step forward in the development of satellite navigation in the AFI region, and in the deployment of the “SBAS for Africa and Indian Ocean” system, the navigation solution for Africa by Africa.

He said: “It demonstrates the ambition and commitment of ASECNA to enhance air navigation safety for the benefit of the whole continent, in line with my vision for the unification of the African Sky.”

ipNX, Nigeria’s pioneering and leading information, communications and technology (ICT) company and the United States Trade and Development Agency (USTDA) have signed a partnership deal that will further support the development of Nigeria’s ICT and broadband infrastructure and help ipNX expand its fibre-optic network to more than 200,000 residences in Lagos and other locations, including Abuja and Port Harcourt.

A virtual signing ceremony that signalled the beginning of this far reaching relationship between the two parties was held on Thursday, September 17, 2020.

Through this innovative initiative, the USTDA is supporting ipNX to promote inclusive, secure and sustainable connectivity across the nation.

The agreements were made possible as a result of several engagements between the USTDA delegation to Nigeria and the leadership of ipNX; and will advance the goals of the recently updated Nigerian Broadband Plan.

At the Signing Ceremony, Ejovi Aror, group managing director of ipNX, said: “We believe that world-class connectivity and broadband internet access will be pivotal to the digital transformation and socio-economic development of Nigeria.

‘We are very positive that this project will play a crucial role in making our belief a reality.”

Aror added that with the emergence of the COVID-19 pandemic, the case for a vibrant ICT sector has never been stronger and the new partnership will bring ipNX a step closer to achieving its mission to continually leverage technology to create innovative solutions that help mankind thrive, while making a crucial impact to the lives of Nigerians across the country.

Mary Beth Leonard, U.S. Ambassador to Nigeria, said’ “These projects will support the development of Nigeria’s telecoms infrastructure and help to achieve the goals of the National Broadband Plan.

“The U.S. Government has committed significant resources to improving telecoms infrastructure in Nigeria and this support is crucial as we believe that investment in critical ICT projects will strengthen the resiliency outlined in Nigeria’s economic sustainability plan.”

Also present at the virtual event, the Director, Technical Standards and Network Integrity of the Nigerian Communications Commission (NCC), Engr. Bako Wakil, who spoke on behalf of the Executive Vice Chairman of NCC, said: “The support this grant will provide to the telecommunications sector, in particular broadband, is in line with the National Digital Strategy and the National Broadband Plan.

“The NCC would like to congratulate ipNX as it shows the company’s integrity and commitment to be selected for this grant”.

ipNX also revealed that it intends to continue to work with USTDA beyond the preliminary stage, to execute many more projects into the future that will bring about the digital transformation and socio-economic development of major cities in Nigeria in alignment with the National Digital Economy Policy and Strategy.

With their partnership, both parties fully agree that further development of the nation’s broadband infrastructure is key to unlocking the potential promised by Nigeria’s digital economy.

According to the World Bank’s ‘Nigeria Digital Economy Diagnostic Report’ released in 2019, Broadband is a key enabler to harness the digital economy transformation and high-speed broadband has the potential to accelerate Nigeria’s socio-economic development.

Manfa, ANSICTA Boss Pledges to Collaborate with NITDA for Establishment of Zonal Office in Anambra State

Mr Theo Manfa, managing director/chief executive officer, Anambra State Information and Communication Technology Agency, (ANSICTA) has hinted that they are ready to collaborate with National Information Technology Development Agency, (NITDA) for the establishment of the agency’s South-East Zonal office in the State.

He stated this when he led ANSICTA delegation to NITDA’s head office in Abuja recently.

Mr Manfa explained that the call for special requests by the state is necessitated by the fact that the state “has long been known as a home of innovation and entrepreneurship, through the various markets like Onitsha and Nnewi and the plethora of locally produced goods they spawned over time.” 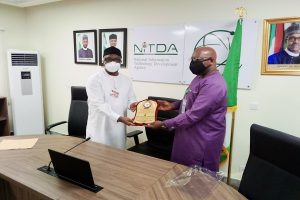 He requested NITDA’s partnership with ANSICTA in building an ICT Hub in Anambra State; hosting a NITDA regional office; hosting NITDA events and programs as a State and region; trainings and Skills development programs of NITDA where the State hopes to train 40,000 residents in the next 2 years in Digital skills; establishment of cooperation on the Nigeria Government Enterprise Architecture (NGEA) and the provision of the Unity Board where 150 units were requested for a program for secondary schools in Anambra.

ANSICTA also presented an award to the Director General for his “Outstanding Achievements in Driving theDigital Economy” which was received by Dr. Vincent Olatunji on behalf of the DG.

Dr. Olatunji responded along with comments from some of the Directors and said NITDA would be glad to cooperate with the State. 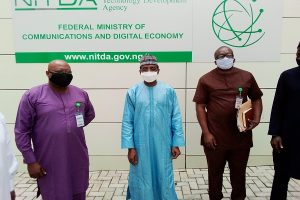 He said it was gratifying to note that Anambra State now has an ICT Agency as Gov Willie Obiano had visited NITDA 6 years ago and the agency had worked with the State in developing an ICT policy for Anambra.

The success of that exercise is the take off of the agency (ANSICTA) which is the execution arm of the policy developed by NITDA.

He further said ANSICTA was by the speech of its MD really in tune with the affairs and mandates of NITDA and stated that ANSICTA should make a formal application for the things requested at this meeting will be looked into by Management for approval by the Director General.

He also thanked ANSICTA for recognizing the hard work of the DG through the award they presented, which he said was most encouraging. 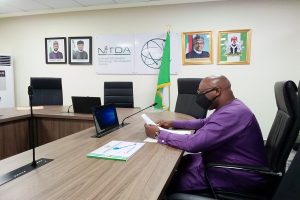