United Bank for Africa Plc (UBA) has announced that Oliver Alawuba has been appointed as CEO of UBA Africa, overseeing the bank’s  20 African country operations, ex-Nigeria.

He succeeds Victor Osadolor, who retires from the Group Board, after 9 years of service working at UBA.

Mr. Alawuba has close to three decades of banking industry experience. He was once the CEO of UBA Ghana and rose to become Regional CEO, UBA Africa before returning to Nigeria to run UBA’s East Bank.

The Board further appointed Senegalese national, Abdoul-Aziz Dia as Executive Director for Treasury and International Banking, subject to the approval of the Central Bank of Nigeria.

Aziz becomes the first non-Nigerian Group Executive Director of the Bank, bringing a wealth of multi geographical experience to the Group.

Mr Dia will be responsible for UBA’s global network of operations in New York, London and Paris, together with Group Treasury, where UBA offers a sophisticated suite of products to multinationals, international institutions and African clients. 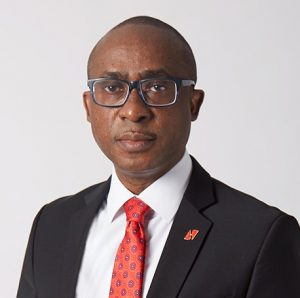 The Board also announced the appointment of as Group Executive Director and the Group Chief Operating Officer, subject to the approval of the Central Bank of Nigeria.

Chiugo is a professional with almost three decades of banking experience that includes the role of Chief Finance Officer(CFO) and Executive Director on the board of a financial institution.

His in-depth understanding of banking and finance industry dynamics will bring a lot of value to the Group Board of UBA.

Speaking on the appointments, Tony O. Elumelu, group chairman said “These appointments emphasise the Group’s commitment to our pan-African and global network, our huge retail client base and our operational infrastructure.  We are focused on improving our efficiency and further strengthening our pan-African mission, using the extraordinary pool of talent and experience available in the Group.”

Elumelu thanked both Mr. Victor Osadolor, the outgoing Deputy Managing Director/CEO, UBA Africa, and Emeke Iweriebor, the former Regional CEO for UBA in East and Southern Africa, who just retired from the board, for their contributions to the Bank.  “Victor and Emeke were key players during the merger of Standard Trust Bank and UBA and have been valuable contributors to the growth of the Bank. We wish them well”.

The Board appointments underline UBA’s broader commitment to investing in the highest quality human capital.  The Bank recently reformed its grade structure and technology teams, having reduced its grade structure from 16 to 12 levels, at the end of 2019.  The Bank welcomed 3,000 new staff members in 2019 and promoted over 5,000 employees.  UBA is the largest employer  in the Nigerian banking sector, with a staff strength of close to 20,000 employees group wide.

The National Insurance Commission, NAICOM, is seeking collaboration especially from State Governments on implementation and enforcement of compulsory insurance.

Speaking during a meeting with the Governor of Ekiti State, Kayode Fayemi, the Commissioner for Insurance Sunday Thomas, noted that over the years, the Commission has embarked on series of programs aimed at a nationwide massive public enlightenment with respect to compliance with the laws on compulsory insurance.

As a subset of the Financial Services Industry, Insurance industry is a pivot to guarantee the sustainability of growth and development of the State and its people, said Thomas, adding, We have therefore noted the necessity to plant “Insurance” and “People” at the center of any equation that tends to create, enhance, sustain and manage growth and development in any economy.”

He said: “As a people, human activities have associated risks and in spite of every precautionary measure to avoid the occurrence of losses or damages, the unexpected still occur.

“In consequence of the losses the victims are prone to sufferings which in many cases may lead to total impoverishment of a large proportion of those affected. To ameliorate the situation of victims, laws have been put in place for an arrangement that will ensure that victims and especially third parties are adequately compensated.”

According to him, “the objectives of protecting third parties and relieving the government of the avoidable burden of compensation from the meagre wallet of the government led to the enactment of various laws on compulsory insurance products”.

Thomas listed the Compulsory Insurances to include, all buildings under construction that are more than two (2) floors (builders liability); all Public Buildings including Schools, offices, hotels, hospitals, markets (occupiers liability) etc; Group Life Insurance for all Employees of both Public and Private Sectors; Professional Indemnity for all Medical Practitioners and Third Party Motor Vehicle Insurance in respect of death, injury or damage to the property of third parties.

The Commissioner added that it is on the strength of the above that the Commission is seeking collaboration with the State government in the enforcement of the above mentioned compulsory insurances in the State.

“As the Chairman of the Nigerian Governors’ Forum there is no better place to start the campaign than Ekiti State.” he said.

He also highlighted the benefits of this collaboration with State Governments, which include, Financial Compensation to the families of insured citizens who may become victims of a disaster through loss of their properties or become disabled in event of occurrence of insured accidents/disasters, robust group life insurance policy made compulsory by the Pension Reform Act 2014 gives hope to the workforce who will be ready to go extra mile in carrying out assign duties knowing fully well that the employer has made provision for the dependant in event of the unexpected and creation  of employment opportunities for citizens of the State.

Others are provision of grants and Fire-Fighting Equipment for the States’ Fire Services by NAICOM from the Fire Fund as stipulated in the Insurance Act 2003, reduction in the government expenditure in event of disaster that may affect the citizens of the State by shifting the burden to the risk-bearers (Insurance Companies), free Insurance and Risk Management Education and Enlightenment programme for the citizens of the State; and creation of additional source of internally generated revenue (IGR) for State Government in collaboration with your relevant Ministries and Agencies.

He therefore appealed to the Governor to graciously consider the benefits of the proposed collaboration for the enrichment of the State and the sustainability of the Nigeria economy at large.

“The nominated agency may be requested to work with the Team of the state who shall be dedicated to this collaboration and recommend appropriate measure to domesticate the enforcement of the compulsory insurances in the State.” he said.

Central Bank of Nigeria (CBN) had disbursed N3.5 trillion to different sectors of the economy to cushion the effects of the Coronavirus pandemic.

Under the Real Sector Funds, Emefiele said: “a total of 87 projects that include 53 manufacturing, 21 agriculture and 13 service projects were funded.

He added: “In the health care sector, 41 projects which include 16 pharmaceuticals and 25 hospital and health care services were funded.”

“The AGSMEIS intervention has been extended to a total of 14,638 applicants, while 250 Small and Medium Enterprises (SMEs), predominantly the youth, have benefited from the Creative Industry Financing Initiative.”

Emefiele said in addition to  the  initiatives, the   apex bank “is set to contribute over N1.8 trillion of the total sum of N2.30 trillion needed for the one year  ESP, through its various financing interventions using the  PFIs.”