Prof. Garba Danbatta, executive vice chairman (EVC) Nigerian Communications Commission (NCC), has re-echoed the commitment of the Commission to unleash more connectivity in digital economy to drive the frontiers of the industrial growth in Nigeria.

Danbatta stated this at the maiden edition of Mobile and Disruptive Technology Forum (MoDiTECH2019) organised by TechEconomy.ng in Lagos on Thursday  where he was represented by Engineer Bako Wakil, Director, Technical Standards and Network Integrity, Nigerian Communications Commission (NCC),. 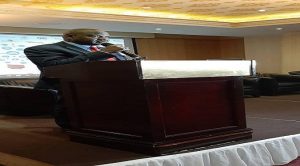 The forum, with the theme: “The Power of Digital Services”, was apt, as discussion around the theme was coming at a time the world is exploring opportunities in newest technologies to harness the potentials of the Fourth Industrial Revolution.

Speaking at the forum, Danbatta said the NCC, through its regulatory excellence, is at the forefront of unleashing the digital economy that will spur industrial growth, job creation, and Return on Investment (RoI) for investors.

According to him, the internet is at the leading edge of digital revolution, which informed why NCC is supporting operators to deploy more infrastructures.

“Today, Nigeria has started a test run of 5G, the latest technology for delivering broadband services and such other services as Internet of Things (IoT), Artificial Intelligence (AI).

“The trial will last for three months. Nigeria hopes to join other countries which are in a rush to deploy the 5G technology because of its immense promise for digital communication,” Danbatta said.

The EVC also disclosed that the Commission was “at the verge of sending the N65 billion request for supporting the already six infrastructure companies (InfraCos) licensed to roll out broadband infrastructure across the country, to the Federal Executive Council (FEC) for approval,” he said.

“The renaming of the Ministry shows a demonstration of the future of telecoms in all government sectors and the economy; the EVC, therefore, commended the Minister, Dr. Isa Pantami and members of the Federal Executive Council for the foresight and dramatic change.

“This, will spur a new debate and redirect the Ministry and other agencies under it as well as the private sector to a new awakening that digital economy brings,” he added.

Peter Oluka, editor, TechEconomy.ng and convener of the event, said the event was organised “to discuss, brainstorm, learn and review the overall impact of new digital technologies that are disrupting many industries.”

Meet Some Of The Speakers For AfriLabs Annual Gathering 2019

Prof. Umar Garba Danbatta, executive vice chairman, Nigerian Communications Commission (NCC), has said that the Commission will continue to promote and facilitate expansion of robust broadband/Information and Communication Technology (ICT) infrastructure across the country for the rapid development of the nation’s digital economy.

Danbatta gave the assurance in a presentation titled “Communication Technology for Service Delivery in Health, Education, Tourism, the Creative Industry and Agriculture” delivered during the first virtual and sixth edition of Information Communications Technology and Telecommunications Conference and Exhibition (ICTEL) EXPO 2020.

He said the Commission, not only successfully achieved but surpassed the 30 per cent broadband penetration target in 2018.

Danabatta observed that through various policy initiatives, broadband penetration has further increased to 42.02 per cent as of July, 2020, noting that this has laid a solid foundation to drive the national efforts at achieving the new 70 per cent broadband penetration target set in the Nigeria National Broadband Plan (NNBP) 2020-2025.

Represented by Efosa Idehen, director, Consumer Affairs Bureau, NCC, Danbatta said in line with this commitment, the Commission has commenced the review of the framework for engaging infrastructure companies to cascade fibre optic deployment to the hinterlands of Nigeria to ensure pervasive access to broadband services in the country.

He stated that with the support of the Federal Government, through the Federal Ministry of Communications and Digital Economy, NCC is resolving the perennial problem of high cost of Right of Way (RoW) with the support of the Nigerian Governors Forum (NGF) to hasten ICT infrastructure that will enable socio-economic activities across various sectors.

According to him, as the world is becoming increasingly digitised; there will be no sector or facet of human life where ICT will not be required for optimal service delivery and improved conditions of living for the citizens.

With regard to the health sector, Danbatta said ICT is playing a very important role in the manner health services are now delivered, adding that the new Internet speed and low latency of 5G technology are expected to further enhance the possibilities of telemedicine and remote surgery.

Similarly, the EVC said the educational sector has also greatly soared on the wings of ICT, as there has been a surge in online learning in many institutions around the globe due to the raging COVID-19 pandemic, while illustrating the symbiotic relationship between ICT and educational sectors.

According to him, the agricultural sector has also benefitted from ICT, as several agro-based apps have been designed to ensure that stakeholders in the sector are able to provide and improve on essential agro-services.

These developments have helped to boost food production and security, just as a lot of digitisation is also holding sway in the creative industry, enhancing its growth thereby enabling job creation and greater contribution to the Gross Domestic product (GDP).

Mallam Kashifu Inuwa Abdullahi, director general, National Information Technology Development Agency (NITDA), has disclosed that the motive behind the issuance of Nigerian Data Protection Regulations, (NDPR) by the Agency was to safeguard the right of natural persons to data privacy, fostering safe conduct for transactions involving the exchange of personal data, enablement of Nigerian businesses to be globally compliant and competitive and to create jobs for Nigerians.

Mallam Abdullahi revealed this Friday while delivering the keynote address  at the 6th annual conference of Institute Internal Auditors of Nigeria, (IIAN) with the theme:, “Agility and Resilience” which was held on zoom conference platform.

The Conference aimed at preparing participants across Internal Audits, Internal Controls, risk management, revenue and Government assurance and other business professionals to learn how to leverage on new technologies and procedures towards actualisation of the organisation’s goals and objectives.

The NITDA DG who was represented Director e-Government Development and Regulations, Dr Vincent Olatunji stated that since inception of the Agency in 2001, it has been playing a catalytic roles to spur the infusion of technology into nation’s work processes reiterating that the Agency plays “critical roles in capacity development, provision of working tools for Ministries, Departments and Agencies (MDAs).

“NITDA also has an existing arrangement with the office of the Auditor General of the Federation to aid the office in the discharge of its activities.”

“As part of his think-tank then, our thinking was that Nigeria needed to quickly provide a regulatory framework for the processing of personal data.

“This was even more pertinent in consideration of the global implications of non-performance.

“Businesses where losing bids because investors felt there was no data privacy regime in Nigeria.

“The Agency’s implementation of the NDPR has been innovative and impact oriented. For the first time in data protection implementation, auditors became recognised as Data Protection Compliance Organisations (DPCO)”.

He maintained that NITDA has 72 licensed DPCOs among which are members of this “august body,” adding that “this posture is not as a result of lack of professionals in the IT industry, rather, we have made conscious efforts to carry every relevant stakeholder along in our developmental regulatory strategy.

“ I hope this noble institute would repay NITDA’s generosity by imbibing ethical and professional principles on your members for better implementation of the Regulation.”

Earlier in his remarks, the Managing Director and Chief Executive Officer, New Capital Cooperatives Society Mr. Benedict Anyalenka while commending the organisers of the conference affirmed that data privacy and protection should be a requisite skill needed for development of the Information Technology Sector as it would create platform for protection of information against unauthorized usage.

Anyalenka, however, called for proper awareness on the importance of data privacy among organisations and stakeholders across the country to safeguard citizens’ data.

As part of its response to the COVID-19 pandemic, the federal government of Nigeria has announced plans to deploy information and communications technology (ICT) in the country’s health sector.

This is part of the plans to achieve transparency and accountability in health care delivery across the country.

According to Azodoh, the federal government has put structures in place to utilise ICT as part of efforts to standardise the healthcare system.

“The government is working hand in hand with state governments across the country to maintain transparency and accountability, adding that ICT and other forms of electronic platforms are currently being improved and expanded following the federal government’s COVID intervention”.

She also shared that the ministry is willing to support small businesses in the sector imploring the participating SMEs to seize the opportunities provided by The Revv Programme.

“I want to ask everyone who is listening to write to the MTN Revv team and say this is one thing I want the Federal Ministry of Health to do to help my business then we can engage on how to proceed,” she enthused.

In her parting remarks, she also commended MTN Nigeria for providing a platform for SMEs to expand their capacity. “I must commend MTN for this excellent initiative. It has been very productive for me and an opportunity to transfer knowledge.”

The Revv Programme is an initiative from MTN Nigeria to help small businesses rethink and retool their operations in order to withstand the effect of the COVID-19 pandemic using a four-pronged approach that includes masterclasses, access to market, productivity tools support and advisory initiatives.