The report that the Nigerian military has commenced monitoring social media activity of Nigerians has been in the news in the past few days.

This development might not be unconnected to the recent pronouncement by the Vice-President that hate speech will soon be considered an act of terrorism.

President Muhammadu Buhari also spoke along this line saying when he spoke concerning some distressing comments he encountered on Nigerian social media during his long medical vacation in London.

John Enenche, director of Defence Information, Major General while speaking recently during an Interview session on Channels television, stated that “The activities of Nigerians on the social media are now being monitored for hate speech, anti-government and anti-security information by the military”.

He went further to state, “What are we doing? In the military, we are now taking on it more seriously than ever. We have our strategic media centres that monitor the social media to be able to sieve out and react to all the ones that will be anti-government, be anti-military, (and) be anti-security. We tackle them appropriately with appropriate responses.

“Ahead of that, we are also proactive. We have measures in place, scientific measures to be able to sieve this information and also to get the public and let them know that some of this information they are getting is not genuine are not true and their objective is an anti-corporate existence of this country.”

These sentiments expressed by the Defence spokesman was echoed by the Twitter handle @DefenseMonitor, which was widely assumed to be a communications outlet for the Defence headquarters.

Thankfully, the Presidential Office for Digital Communications through their Twitter handle @DigiCommsNG has come out to denounce the @DefenseMonitor handle as fake.

As we wait for more facts to emerge, we at Paradigm Initiative are justifiably alarmed at this development and call on all other defenders of digital rights of Nigerians to join us in calling for caution. We contend that all measures taken to safeguard the security of Nigerians must also by default protect their digital rights such as privacy and freedom of expression online.

In response to these developments, ‘Gbenga Sesan, the executive director of Paradigm Initiative, said, “The statement made by the Director of Defence Information during the Channels television interview is worrisome. More troubling is the inability of the Defence Headquarters in following the Presidential Office for Digital Engagement in denouncing the tweets by @DefenseMonitor – tweets which essentially echo the sentiments of the Director of Defence Information. Merely disowning the twitter handle is not enough, the military must assure us by its words and actions that it does not share the sentiment expressed by the suspended twitter handle”

Speaking further on this, Tope Ogundipe, the director of Programmes of Paradigm Initiative, stated, “We urge for caution in light of this new development. While we await more information, the words of the Director of Defence Information and the sentiments echoed by the now denounced Twitter handle @DefenseMonitor are consistent with the experience of numerous Nigerians who have been arrested for exercising their right to freedom of expression online. We maintain that the digital rights of Nigerians must be respected irrespective of any security measure implemented by the government”.

Lending his voice to the debate, Boye Adegoke, the program manager for Magoyi, Paradigm Initiative’s digital rights advocacy programme, added, “This new development follows a noticeable trend in Nigeria, where policies and legislation like the Cybercrime Law have been made by the ruling class to silence the voices of ordinary Nigerians. In response to this, over the years Paradigm Initiative has organized workshops and roundtables to sensitive the public and policy makers on digital rights. We are also working alongside our partners to pass the Digital Rights and Freedom Bill, which seeks to safeguard the human rights of Nigerians online, into law”.

Although Paradigm Initiative very much supports any effort taken to safeguard the security of Nigerians, we contend that they must have a basis in the rule of law and must have the appropriate legislative oversight. Paradigm Initiative, therefore, calls on the Defence Headquarters to join the Presidential Office for Digital Engagement in denouncing the viewpoints expressed on the @DefenseMonitor Twitter handle.

Paradigm Initiative will continue to work to defend the digital rights of Nigerians. Digital rights like privacy and freedom of expression are important components of modern societies and must not be sacrificed on the altar of national security.

With Konet, users  can: chat with people from all over the world, create newsgroups, organize remote meetings, build  professional network or even follow the news of their contacts

Wale Ajiesebutu, executive vice chairman/chief executive officer, 21st Century Technologies, said that “ Konet allows for real-time collaboration and improved productivity in your workplace. There are no limits, be you an individual looking for affordable solution, a small business owner, or large organizations” he added.

Some of the security and protection on Konet include: cloud 24/7 NOC & technical operation; secured media and signaling flows; encrypting data during traffic and during storage; and unique and dedicated, only includes the user group you defined.

Others are: generalized to your company, includes all the users you defined along with all your company and subsidiary users;  public, your company users and the rest of the world; and for quicker approval process of documents shared.

Konet adapts to user’s needs and those of the teams by offering fully customizable tool.

It has inbuilt instant chat messages to keep in touch with your teams and users can organize group discussions.

Users can also share files in their workgroups so that members can access them at any time.

It has the latest activities and notifications available in one click from the  dashboard.

Konet has flexible rates according to the number of collaborators without limit of the number of meetings or documents exchanged.

For conferences; users can call to organize remote meetings with their  teams around the world.

Another feature ofKonet  is spam protection and account delegation as well as disclaimer and can automatically sort emails into different categories to reduce clutter. This feature is really helpful.

With technology shrinking the world to a global village, Outcomexpo, a mobile friendly indigenous solution that allows event organisers to run trade shows and exhibitions has been launched into the Nigerian market. 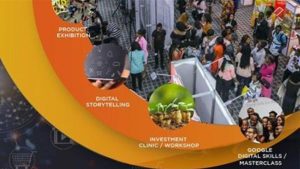 Speaking to Technology Journalists at the weekend via virtual press conference, Maritha Anyanwu, Head, Media & Publicity Outcomexpo.com said that the development of the solution was informed as a result of Covid-19 which now compelled the event industry across the globe to look for new and innovative ways to stay relevant.

“Under these circumstances, Outcomexpo stepped up to fill the much-needed gap and bring relief by launching a world-class Digital Expo Center which can be used by any organiser accross the globe.

“It is mobile-friendly and allows Organisers to host Digital Trade Shows. Buyers from the comfort of their homes or offices can attend without physical and geographical barriers associated with traditional expos”, she explained.

While the solution enables exhibitors to understand and get insights to buyers behaviour via rich reporting and advanced analytics, by showcasing on the digital platform, she added that organisers get huge cost savings on venue, travel, hotel, logistics and other expenses.

“Buyers have ease of registration and access from the comfort of their homes without going through hassles and stress just to get to the venue. They also have Real-time live chat and 1-1 video with Exhibitors”, she further explained.

Speaking on other features and benefits of the solution, she disclosed that exhibitors could have their customizable display booth showcasing company multimedia elements including e-brochures, posters, videos and more.

Showcase unlimited product offerings with rich content formats and allow attendees to access and explore these offerings from the comforts of their homes, she said.

Live communication between Buyers and Exhibitors in real-time through chat facilities and to bring about a more engaging and interactive experience, she said is among unique features of the digital platform.

Excellent source of acquisition of new suppliers, possibility of reaching to bulk buyers whom rarely participate in traditional fair, but who spend a lot of time on the internet. Incomparably lower costs of participation in a Digital expo, high return on investment in participating in the Digital expo in comparison with the participation in the traditional expo, are also among the benefits and features of the digital platform.

Prof. Adesina Sodiya, president, NCS, in a statement, expressed the society’s support of the decision, which was made known by the commission last month, in its policy document on conducting elections in the context of the COVID-19 pandemic.

Sodiya said, “NCS is indeed happy with the current position of the electoral umpire to work towards the full introduction of electronic voting in major elections starting from 2021.

“This is a decision which has been hitherto advocated by NCS and indeed, the panacea for better and transparent electoral processes.”

He pointed out that Nigerians had paid the price through electoral violence in a bid to conduct their civic duties, saying e-voting would solve the electoral challenges unlike other methods.

He said, “Certainly, e-voting will curb electoral violence, coercion, intimidation, wastage of resources and general result manipulations. It will enhance prudency, reliability and acceptability of results.

“With the current pandemic ravaging the whole world, the full adoption of e-voting for our subsequent elections in Nigeria becomes inevitable.”

The president pledged the support of NCS and Computer Professionals (Regulatory Council) of Nigeria in the full adoption of e-voting in Nigeria and expressed their willingness to partner with INEC.

He added, “The NCS and CPN are ready to partner INEC in strengthening the Information Technology capacities and capabilities of the commission for the effective realisation of the lofty plan.

“The IT community can provide the backbone for the very best in processes, technologies and people needed for planning, execution and evaluation of the e-voting system.”