If you’re anything like us, this past year has been a whirlwind of work deadlines, social engagements and task juggling.

We’ve barely had time to go to the gym, let alone the cinema to catch the latest releases.

That’s the beauty of DStv’s BoxOffice feature – you can enjoy all the Hollywood movies and local content you didn’t get a chance to watch from the comfort of your couch. 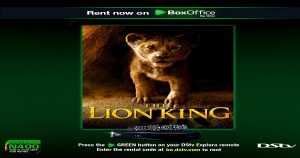 Plus, it’s a whole lot cheaper than a family trip to the cinema, and there are two ultra-convenient ways to access BoxOffice to rent and watch movies instantly.

BoxOffice on the PVR is available to all DStv customers. The catalogue of up to 15 pre-loaded new releases is regularly updated, with some movies made available the same day as they go to DVD.

BoxOffice Online, the online version of the movie rental service is available to anyone with a DStv Connect ID and a BoxOffice Account. You can sign up at www.dstv.com/boxoffice or www.boxoffice.dstv.com. Here, you’ll have instant access to a larger catalogue of movies, including new releases and classics.

All set? Great. Here’s a list of exciting, binge-worthy content to sink your teeth into this festive!

The amazing live-action remake of the Walt Disney classic needs no introduction, but in case you’ve been living under a rock, Beyoncé and Donald Glover star as Nala and Simba in this photorealistic computer-animated film. Young prince Simba returns to Pride Rock after the murder of his father to take back his rightful place on the throne as King of the Jungle. A must-watch for the whole family.

This American disaster horror film is perfect for those who like to snuggle up under a blanket and enjoy the thrill of a scare or two. During a category-5 hurricane in Florida, Haley ignores the evacuation orders to search for her missing father. She finds him, gravely injured, in their flooding family home, along with blood-thirsty alligators.

Fans of the Rambo franchise will be pleased to see Sylvester Stallone back in action in the latest instalment of the series. On one final mission, Rambo must confront his past and unearth his ruthless, revenge-seeking combat skills.

Kids will adore this animated superhero film, which crosses over between the TV series Teen Titans Go! and Teen Titans, both of which are adaptations from DC Comics. Expect jam-packed action and an epic battle to prove which team is superior.

Another superhero flick to keep those kiddies entertained – this time from Marvel Comics. Tom Holland returns as the beloved Spidey, following the disastrous events of Avengers: Endgame. In a world that has changed forever, Spider-Man must take on new threats as four massive elemental creatures – representing earth, air, water and fire – emerge from the gigantic gap in the universe.

Last, but certainly not least, this South African Indian comedy-drama is another favourite for the whole family to treasure. An appropriately named nine-year-old misfit, Feisty, dreams of being an unbeatable Bollywood hero to defeat the bullying local crime lord threatening his family.

Available Online until 28 February 2020 or on PVR until 10 December.

And there you have it, folks – some of our top picks to catch up on during your well-deserved downtime. Visit www.boxoffice.dstv.com/how-it-works/all to discover how to effortlessly rent the hottest movies at home or on the move, for enhanced viewing pleasure.

Just one of the many ways DStv continues to bring world-class content to local screens.

NYCN Calls Out ICPC for Persecuting NBC, Others

It’s another weekend of football and football fans can look forward to the best football action from the Premier League, La Liga and Serie A on SuperSport.

In the Premier League this weekend, Liverpool and Arsenal will face off at Anfield on the evening of Monday 28 September, at 8:15pm on SS Premier League. The Reds and the Gunners are set for an explosive encounter which will feature prolific African goal scorers such as Mohamed Salah, Sadio Mane and Pierre-Emerick Aubameyang.

Liverpool will be looking for revenge against Arsenal, given that the teams’ last two meetings have both gone the way of the London side: 2-1 in a Premier League clash in mid-July and a penalty shootout triumph in the Community Shield late last month.

The top clash for this La Liga round sees champions Real Madrid head to Estadio Benito Villamarin to face Real Betis. This will air on Saturday 26 September at 8pm on SS La Liga and SS GOtv La Liga. Los Verdiblancos have been a bogey team for the capital side in recent times, notably defeating Zinedine Zidane’s side 2-1 in their last meeting in March (prior to the season suspension) to extend their unbeaten run in the rivalry to three matches. SuperSport is the only place to get English commentary from the legendary La Liga.

Barcelona will face Villarreal at 8pm on 27 September while Sevilla will face Cadiz on Monday 18 September at 8pm both on SS La Liga and SS GOtv La Liga.  Barcelona and Cadiz are back after being given the first two match days off to have extra recuperation time from last season’s UEFA Champions League and Europa League campaigns.

More on La Liga this weekend will see Eibar meet Athletic Bilbao at 8pm on Friday 25 September. While on Saturday at 12 pm Deportivo Alaves will clash with Getafe, Valencia will also clash with Huesca at 3pm and Elche will face Real Sociedad at 5:30pm all airing live on SS La Liga and SS GOtv La Liga. Sunday 27 September SS La Liga and SS GOtv La Liga will air Osasuna vs Levante live at 11am, Athletico Madrid vs Granada at 3pm and Real Valladolid vs Celta Vigo at 5:30pm.

The headline match from Serie A for this round is the Sunday night clash of Roma and Juventus at the Stadio Olimpico in the ‘Eternal City’. This will air on SS Football and SS GOtv Select 1 at 7:45pm. Other matches on Sunday 27 September includes,Spezia vs Sassuolo at 11:30am, Napoli vs Genoa at 2pm and Crotone vs Milan at 5pm also live on SS Football and GOtv Select 1.

Elsewhere, Internazionale will have their first match of the season when they host Fiorentina at the San Siro in the late kick-off on Saturday evening at 7:45pm. Also on Saturday 26 September at 2pm, Torino will face Atalanta while at 5pm, Cagliari will face Lazio. Both Live on SS Football and SS GOtv Football. The weekend will conclude for Serie A with Bolongna vs Parma on Monday 28 September at 7:45pm live on SSFootball, SS GOtv Football and SS GOtv Select 1.

SuperSport promises the best of football this season as viewers on DStv and GOtv can see all their favourite stars from the African continent dominating in leagues across Europe.

Don’t miss the 2020-21 football season on SuperSport on DStv and GOtv.  For the full football experience, reconnect or subscribe to any of these packages; DStv Premium, Compact Plus, Compact, Confam & Yanga and GOtv Max & Jolli for selected matches.

Also, visit www.dstvafrica.com and www.gotvafrica.com and download the MyDStv app or MyGOtv app from the iOS and Android store to upgrade, reconnect or select the Auto-Renewal option to stay connected to quality football entertainment without interruptions and for other self-service options. And while you’re on the move, you can stream matches on DStv Now.