Nigerian music superstar, Kcee, who one week ago took to social media to enlist the help of his teeming followers to locate a long lost friend, has finally found that friend.

Kcee, whose last interaction with the said friend, Ocheku Osheme, happened over 20 years ago, received the biggest, and perhaps the most unexpected, form of assistance from popular beer brand, “33” Export.

An emotional video from the self-proclaimed Limpopo king first appeared on Twitter and Instagram on Tuesday July 23 and in it, Kcee pleaded with his followers to share and like the video until Osheme was located. 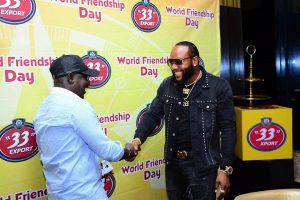 As the search gained momentum, “33” Export stepped in. This turned out to not only legitimize the quest; it also added a much-needed wind to Kcee’s sails.

As some commenters noted online, the partnership between the singer and the beer was a partnership made in friendship heaven.

Having built its entire brand persona around the spirit of mateship, it was only logical that “33” Export would commit itself to helping Kcee, or anyone at all, on his mission to reestablish great friendship.

“I’ve been thinking of Osheme a lot of late and I knew I had to find him. For “33” Export to not only lend their support but also join me on the search? That’s priceless and I’ll forever be grateful,” said Kcee.

But why was it suddenly important to find Osheme? As Kcee explained, he couldn’t postpone it any longer.

While he and Osheme were growing up in Ajegunle, Osheme was his best friend, the boy he could absolutely count on to be there for him.

But since they lost touch, more than 20 years ago, his hopes of running into Osheme had remained nothing but a mirage. 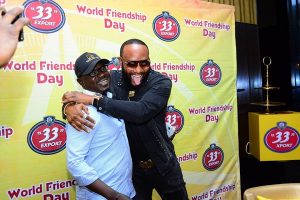 “So, I had to come to social media to find my Day One. It’s been too long. I have fantastic fans and followers. Nothing else to do but to call them to assist me,” he said.

However, once it had helped to find Osheme, “33” Export then took its contribution a step further.

The leading beer brand rewarded two of KCEE’s fans by helping them reconnect with their own long lost buddies.

Speaking on why the brand chose to join the search, Brand Manager, “33” Export, Aminah Jagun said, “With all of the unique activities “33” Export has championed around friendship in the past, we couldn’t pass off an opportunity like this to show our support and also solidify our stance as a brand that cares.

“‘33’ Export has firmly establishing its place in the minds of its loyal consumers as the No 1 friendship beer brand that cares about the relationship it shares with them and their friends.”

All the Exciting Programs Coming to DStv this August